As a Nashville sports writer, you think I would be happy, right? Right?! WRONG. For all that went right this week, there is something I’ve been meaning to write about since week three.

The Titans have a major problem on their hands.

While they have some of the most loyal fans in the NFL, the franchise struggles to gain new fans. That is a problem you simply cannot have in one of the nation’s fastest-growing city.

Here is what I believe to be factors to why the Titans are struggling to grow their fan base, and some ideas I have to fix it.

I apologize if this comes off as ignorant or complaining, but I’m going to put my support behind this team next year. I need to know they are thinking about the future, while not forgetting the people who made this team what it is.

The thing to remember while reading this is, this is my opinion. I am using this to create a conversation, please let me know if you disagree. I WANT TO BE WRONG ON SOME OF THIS.

Over the river in Smashville, one of the quickest growing fan bases in Nashville, one constant compliment of the Predators is that their in-game experience is second to none.

Music is loud, chants-a-plenty, live band performances at intermission, fans thanking a PA announcer for announcing the last minute of play. All of these factors create a must-see environment for all fans from around the world.

Yes, you can attribute some of this to their recent winning ways, but the groundwork has always been there.

On the other hand, the Titans in-game experience has rarely changed in the almost 20-year history of the franchise, and the age is showing. A mascot race, low energy “hard work” songs to hype the offense, a Johnny Cash pain train singalong (A highlight), and bell toll on 3rd downs is all the Titans have to offer for entertainment.

One other thing that some people may love, but I find humorous is the beloved 300 “ahwoo ahwoo ahwoo” chants after a first down announcement. A quick history lesson to those who only saw the movie and loved the gory slow-mo. The 300 almost all died and lost the battle.

To me, that chant shows the lack of attention put into the game day experience. A chant of a people preparing to lose a battle is the best you can come up with? Really?

SOLUTION: PUMP NEW IDEAS AND CHANGE IT UP

So to this point, I say to the Titans, fix this. Make new fans want to come to games. Make it high energy all the time. Make watching the game at a Broadway bar less appealing than sitting in 10-degree weather watching the game at the stadium. Sit down with the Predators, sit down with younger folks, sit down with residents new and old and hear their ideas. Incorporate those suggestions to improve the in-game experience. Please.

PROBLEM: HONORING HOUSTON, A LITTLE TOO MUCH

The Titans as an organization shouldn’t exist before 1998. I know the team moved from Houston and their history is important to the Titans as a whole, but when I see more about Warren Moon and Earl Campbell then I do about Titans legends, we have a problem. Yes, Eddie George and Steve McNair get mentioned a lot, but those can’t be the only legends you have.

So to the Titans, I say this: to remedy this issue of an identity crisis, create a new one. You have a great chance this next year as your owner has already announced a uniform change for next season. My suggestion, drop the Houston red, incorporate….GOLD.

Because of the Predators and NSC, gold and Nashville have become one in the same. Now, Titans fans calm down, two-toned blue can stay but line it with gold. Lose the flame on the logo and incorporate gold into it. A simple circle encompassing the T-Tristar combo is simple and fresh. It nods to the state we all call home, with the city they play being put front and center.

Getting rid of red, will not only finally separate Houston from Tennessee, it gives new fans merch that is uniquely Nashville. 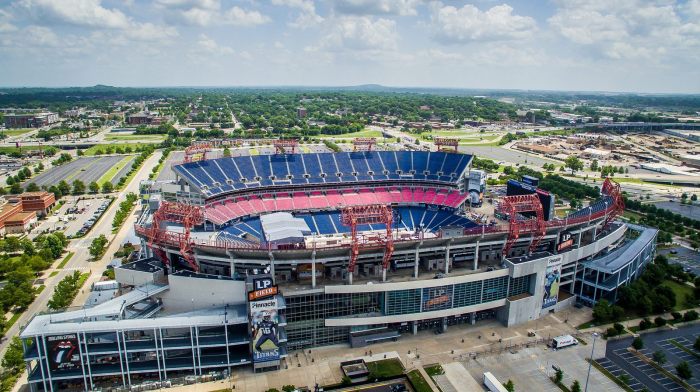 Holy cow, Nissan may be one of the NFL’s worst stadiums. I’ve been in Texas High School stadiums that are more accommodating to fans than Nissan is. Two concrete towers and a lower bowl make up this stadium.

Also, while the open nature of the stadium is a cool design look, it hampers the in-game experience. The noise dies in the stadium, and the towers feel as they are miles away from the field of play. I want an intimate feeling while I am sitting in this massive stadium, not the feeling of sitting on the AT&T building watching the game.

SOLUTION: FIX AND CLOSE THE STADIUM

Or at the very least add walking bridges between the two towers. While I know attendance is not to the point where a full bowl stadium feels possible, it would certainly help the experience of going to games.

Now, like I said at the beginning of this article I am going to be supporting this team next year as my main team. These are some things I see are a problem coming in. None of these ideas need to be taken seriously, or even have to be correct. You may disagree on every point I made. Good. Tell me why I am wrong. Tell me why you think the Titans are doing everything right. Show me something.

Thanks for reading my rant everyone! I appreciate in advance all the conversation to come from this. As always: Titan UP! And remember We are all HasBeens.